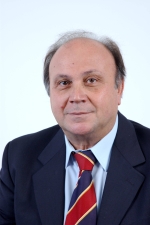 Mr Diathesopoulos, a lawyer by profession, practices in his home town of Pireus. A graduate of the University of Athens, Faculty of Law, he speaks fluent English. As a student he played volleyball and between 1992 and 1996 he acted as a sports judge in volleyball. He is also an international Water Polo referee for both LEN and FINA and between 1990 and 1994, whilst a LEN Bureau member, he was the Bureau Liaison for Water Polo. He had involvement with the Athens Olympic Games, both as a member of the bidding and organising committees.